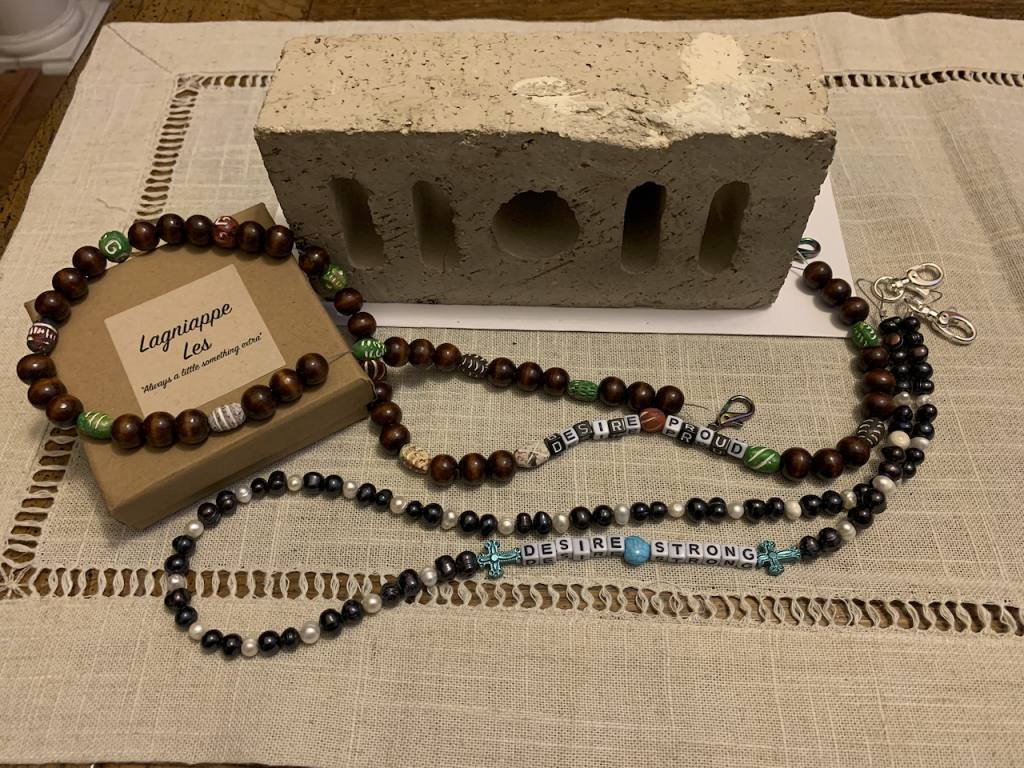 Some people may see a brick in this photo. I see many years of dedication, hope, dreams, love and determination. I often wonder what part did this brick play in the history of 3304 Metropolitan Street in the Desire Community. How many baptisms, confirmations, graduations, weddings and funerals have crossed its path? Was it near the cornerstone that held the beginning history of the church? Maybe it was a foundation brick that held up many other bricks, just like the many founding members of the parish. Which member of the parish actually prepared this brick to be layed? If its location was the rear of the structure, it saw many years of children growing, playing and learning together because it would have been in close proximity to St. Philip the Apostle Catholic School. This structure’s faith was met far before the demolition and death of the parish church.

Originally, St. Philip the Apostle’s Church was not on the manifest to be demolished. I was telephoned by my eldest son whom was visiting the neighborhood to photograph it for history. Although we were New Orleans East residents, 3033 Metropolitan was a 2nd home to he and his brother. Every Sunday they could be found with other young members of the parish,  worshipping God or performing altar server duties. When he informed me that the church was being bulldozed as he spoke, I could hear the sorrow and disbelief in his voice. I immediately hung up the phone and called the Archdiocese’s main office. I was told that I had to be mistaken. St. Philip the Apostle had not been placed on the list for demolition. I was then put on a brief hold. When the office worker returned, she offered her condolences. The beautiful stained glass, the church’s cornerstone, and I’m certain items that were left inside the church, had all met its death that unfaithful day.

Upon relaying the information to my husband, he rushed over and confiscated several bricks for me and other members of our family. Although this object holds many memories for my family and I, I’ve learned over the years that the love and strength did not live in the brick and mortar of the church, but in the memories and hearts of all, both parishioners and non-parishoners, that were blessed to have crossed its threshold.

XWe use cookies on our website to give you the most relevant experience by remembering your preferences and repeat visits. By clicking “Accept”, you consent to the use of ALL the cookies. In case of sale of your personal information, you may opt out by using the link . Read MoreCookie settingsREJECTACCEPT
Manage consent

This website uses cookies to improve your experience while you navigate through the website. Out of these cookies, the cookies that are categorized as necessary are stored on your browser as they are essential for the working of basic functionalities of the website. We also use third-party cookies that help us analyze and understand how you use this website. These cookies will be stored in your browser only with your consent. You also have the option to opt-out of these cookies. But opting out of some of these cookies may have an effect on your browsing experience.
Necessary Always Enabled
Necessary cookies are absolutely essential for the website to function properly. These cookies ensure basic functionalities and security features of the website, anonymously.
Functional
Functional cookies help to perform certain functionalities like sharing the content of the website on social media platforms, collect feedbacks, and other third-party features.
Performance
Performance cookies are used to understand and analyze the key performance indexes of the website which helps in delivering a better user experience for the visitors.
Analytics
Analytical cookies are used to understand how visitors interact with the website. These cookies help provide information on metrics the number of visitors, bounce rate, traffic source, etc.
Advertisement
Advertisement cookies are used to provide visitors with relevant ads and marketing campaigns. These cookies track visitors across websites and collect information to provide customized ads.
Others
Other uncategorized cookies are those that are being analyzed and have not been classified into a category as yet.